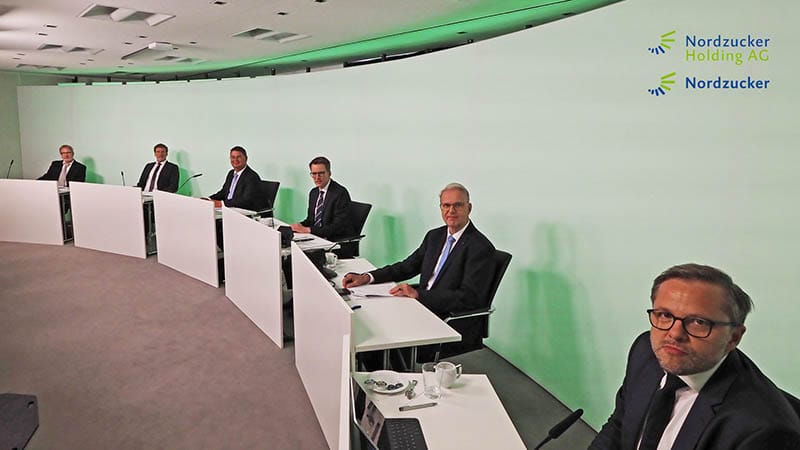 The Annual General Meetings of Nordzucker AG and Nordzucker Holding AG, the latter’s largest and most significant shareholder with a stake of 83.8 per cent, were held together for the first time on 7 July 2021. The merger means a simplification of the organisation and the effort for the shareholders as well. They now only need one general meeting date to exercise their shareholder rights for both companies. The meeting was broadcast on the internet on Nordzucker’s homepage.

Nordzucker AG’s 2020/21 financial year, which was reported to the joint general meeting, closed with EBIT of 81 Million Euro (previous year’s loss 15 Million Euro). The realignment of the sales strategy, the significant streamlining of the organisation and comprehensive permanent cost reductions made the operating result of 81 Million Euro possible, with a stable market environment supporting the positive business performance. The majority stake in Mackay Sugar Ltd. in Australia also made a positive contribution.

“We are benefiting significantly from the improvement in our cost structure as markets continue to be stable in the current year. Therefore, we expect another clearly positive result in the annual financial statements this year,” Dr Lars Gorissen, CEO, made clear.

For the future, the Group is focusing on excellence in the entire value chain. “There are extensive measures on our agenda. The implementation of our sustainability strategy and our excellence initiatives will accompany us in the coming years. The optimisation of our processes, progressive digitalisation and further planned cost reductions will have a positive impact on our results,” Gorissen emphasised.

Jochen Johannes Juister, Chairman of the Supervisory Board of Nordzucker AG, emphasised in his presentation: “Transformation, cost reductions and a focus on the targets we have set have shaped the 2020/21 financial year. The Supervisory Board is convinced that Nordzucker’s planned measures in terms of growth, sustainability and excellence will increase competitiveness and thus further promote beet cultivation in Europe.”

The Annual General Meeting re-elected Dr Carin-Martina Tröltzsch, Kürten, as a member of the Supervisory Board of Nordzucker AG with a convincing majority.

At Nordzucker Holding AG Franziska Bennecke (Kissenbrück), Heinrich Otte (Ehmen) and Jan-Wilhelm Strampe (Barum) were elected to the Supervisory Board for the first time.

Amendment of the Nordzucker AG Articles of Association

The proposed amendment to the Articles of Association of Nordzucker AG on the remuneration of the Supervisory Board was approved by the Annual General Meeting. All detailed voting results can be found here on the Internet.

Constituent meeting of the Supervisory Board

Jochen Johannes Juister was confirmed in office as Chairman of the Supervisory Board of Nordzucker AG. Helmut Bleckwenn, Schellerten, was again elected as deputy for the shareholder representatives and Sigrun Krussmann, Seelze, was elected as deputy from the employee side.

The recording of the speech by the Executive Board of Nordzucker AG at the Annual General Meeting on 7 July 2021 can be found here.